Find this article at:
go.ncsu.edu/readext?330140
— Written By Emily Walter

As a long-time member of the Duplin ECA Club, Ruby Brinson received an award for outstanding leadership. Club member Mae Bell Satchell was recognized with an outstanding volunteer award. In addition, the club received an Award of Excellence for excellence for educational and organizational achievements in fulfilling the mission and purpose of the NC ECA organization. 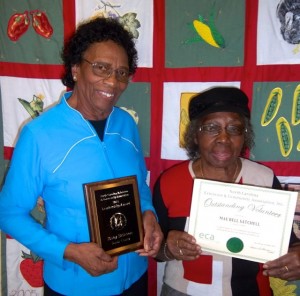 Duplin Extension and Community Association Club members (l to r) Ruby Brinson and Mae Bell Satchell were recognized at the state conference of the ECA organization. Ms. Brinson, who has been a Duplin ECA club member more than 35 years, was recognized for “Outstanding Leadership” to the ECA organization for her service at the local and state levels. Mae Bell Stachell received an “Outstanding Volunteer” award.

One of the several local projects the ECA club has done this year and will continue into 2015, is making simple dresses for needy children. The dresses work best made from a cotton or cotton blend material and the club received many donations of fabric earlier in the year. However, according to Ms. Bowles, the supply of this kind of fabric is getting low and club members are appealing to the public for additional donations, which can be dropped off at the Duplin County Cooperative Extension office at 165 Agriculture Drive, Kenansville.

The ECA state conference offers club members from across the state an opportunity to participate in educational workshops, leadership training, and a cultural arts competition is held.

Locally, anyone interested in becoming a NCECA member or starting a club in your community, call your Extension Center at 910.296.2143. Educational program opportunities are offered to all people regardless of race, color, national origin, sex, age or disability.